He was born in Nanotah in the year 1248 H (1832 CE). He came to Saharanpur at a young age. He read the short texts under Shaykh Muhammad Nawaz al-Saharanpuri. Then he travelled to Delhi, and he came under the tutelage of Shaykh Mamluk al-‘Ali al-Nanotwi. He read under him all the books of study. Then he took hadith from Shaykh ‘Abd al-Ghani ibn Abi Sa‘id al-Dihlawi, and he stayed in his company for a period. He took the spiritual path from Shaykh Imdad Allah al-‘Umari al-Thanawi, and he accompanied him and was blessed with many spiritual effusions from him. He worked at the Ahmadi Press in Delhi under Shaykh Ahmad ‘Ali ibn Lutf Allah al-Saharanpuri, who was a great teacher at that time, and was working on preparing Sahih al-Bukhari and annotating it, so he delegated five sections from the end of the book to him, which were the most difficult sections, especially the areas in which al-Bukhari objected to Abu Hanifah. Thus, he expended his effort in preparing the book and annotating it, and he excelled in supporting the madhhab, and gave it its full due.

He was the most ascetic of people, the most pious amongst them, and the most frequent in dhikr and contemplation from them, and the furthest of them from the dress of the ‘ulama’ and clothes of the students of jurisprudence, like the turban, shawl etc. At that time he would not issue fatwa or preach, but engaged in the remembrance of Allah (Glorified is He) and His meditation, until the doors of the realities and sciences were opened to him. The aforementioned Shaykh Imdad Allah bestowed successorship to him, and praised him saying that “the like of Qasim is not found except in a bygone age.” Then he married under his noble direction. And he ascended the pulpit under instructions from Shaykh Muzaffar ibn Mahmud al-Kandehlewi, so he preached with an excellent preaching.

When the great civil war erupted in India in the year 1273 H, they accused him of rebellion against the English government. Thus, he hid from the people for a period of time. Then he emerged, and Allah (Glorified is He) saved him, and proved his innocence from what they said. He migrated to the Hijaz with Ya‘qub ibn Mamluk al-‘Ali al-Nanotwi and a group – in the year 1277 H – where he performed Hajj and Ziyarah. He memorised the Qur’an during that journey. He returned to India, and stayed in the city of Meerut for a period of time. He would earn his livelihood by editing books for the Mujtaba’iyyah Press of Mumtaz ‘Ali Khan. He was at the city of Meerut when Shaykh al-Hajj ‘Abid Husayn al-Deobandi founded an Islamic seminary at Deoband [1]This is what the historians mention, but it is understood from the book Sawanih e Qasimi by Shaykh Manazir Ahsan al-Gilani (Allah have mercy on him) that al-Hajj ‘Abid Husayn communicated with … Continue reading. He endorsed it and became one of the members of the seminary and supported it with full support. Then he travelled to the two noble Harams in the year 1285 H, and he performed Hajj and Ziyarah. He returned to India and settled in Meerut.

He had great displays in dialogue with the Christians and Arya Samaj. The most famous of them are the debates that occurred in the city of Shahajanpur in the year 1293 and 1294. Thus, he debated the priests of the Christians and the scholars of the Hindus multiple times, and he defeated them and erected proofs [against them] and he displayed his skill in debate. Shaykh Fakhr al-Hasan al-Gangohi detailed these [debates] in his book Intisar al-Islam and in Guftogowe Mazhabi and in Mubahathah Shahajanpur and other treatises. 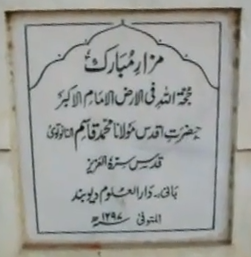